When EU cares about fish.

It might not seem obvious from the start, but fish behaviour and population dynamics are a concern for policy makers. Why is it so? Well, fish are both a resource and a marker of ecosystem health. For instance, Atlantic salmon has been exploited for hundreds of years, at different scales and in contrasted ecosystems: freshwater, marine water. They migrate between ecosystems and between nations, even continents. European eel is no different: this species' habitat is approximately a quarter of our planet. Brown trout is another example, being able to exploit sea resources such as plankton, or being capable of surviving in high altitude lakes.

This is no mystery that much of these resources are now in jeopardy: Atlantic salmon and European eel have strongly declined the past 50 years. Over-exploitation, habitat degradation, and possibly climate change are at wheel here.

So, there are good reasons for which policy makers should care about fish behaviour and populations. And they do in fact. Between 2009 and 2014, our lab has been part of a large project, the  AARC project, bringing together public information, ecosystemic restoration, academic teaching, and efficient science. Because we are reaching the end of this program, we would like to hint at some of the actions developed by our lab thanks to this EU funding.

First, did you know European eels have only a weak genetic control over sexual determination? In this species, it appears that sex is largely environmentally determined, over the course of the life cycle. This question was explored by Benjamin Geffroy during his PhD, and he investigated the dynamics of gonads development in rearing conditions, as well as the aromatase gene expression, an hormone known to control for sexual differentiation in fish [1]. Benjamin obtained some surprising results for some of the eels: while many could be tagged as female or male at a reasonable age and size, some appeared as intersexual with a gonad containing cysts with spermatozoa and pre-vitellogenic oogonia. In addition, the percentage of males was very high, whatever the density tested. While the cause of such dominance of the male phenotype still escapes us, it directly impacts our management practices regarding European eel conservation and stocking decided by the EU. 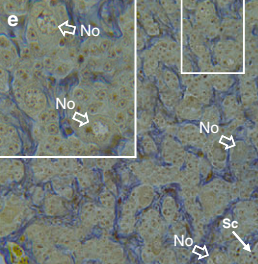 Example of gonad for an intermediate gonadal phenotype, with both spermatocytes (Sc) and normal oocytes (No) in the same gonad [1].

For some species, we are much more advanced at evaluating stocks, and even selective impacts of over-exploitation.  Yet, the diversity of interest for a given resource makes it hard - if not impossible - to find a compromise that may satisfy everyone. Salmon is an iconic incarnation of this problem. Amateur anglers like to catch their yearly salmon during the reproductive migration back in rivers. But professional anglers also want to benefit from this resource when salmon enter the estuaries after their marine migration. On top of that, fishing in high seas is targeting salmon feeding areas around Greenland or Feroes Is. Did we mention naturalists that just love watching salmons jumping upstream waterfalls? And biodiversity managers, that have to make sure that the species remains healthy and viable.
Mélanie Brun tried to tackle this problem, and summoned mathematics as fresh troops to do so [2]. Simply put, she proposed that each stakeholder defined a utility function for the resource: what level or characteristic of the resource is the most important or the least important for them. Of course, the biodiversity managers will not draw the same function as the professional angler, for instance. But Mélanie found a way to objectively locate some common grounds where all stakeholders would see their claim at least partly acknowledged. This decision making tool simply helps at targeting what is of shared importance among the resource users, while ensuring that the resource does not dry out. 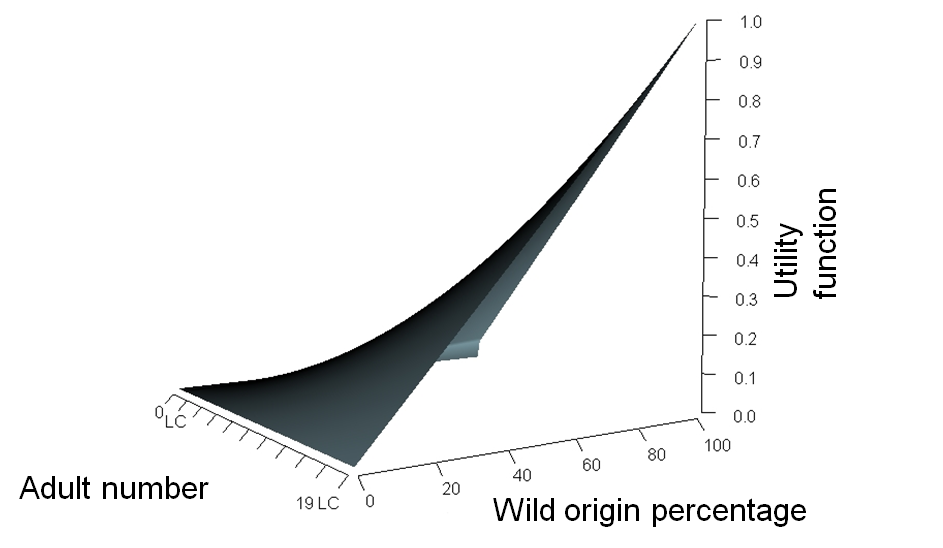 Can brown trout see into the future?

We often talk about brown trout on this blog, but let us not weaken. Because of climate change, hydraulic dynamics of lotic freshwater are expected to increase in stochasticity: extreme events are predicted as more frequent in the near future. If you are a female trout, you might want your offspring to avoid a cruel fate, such as: being scoured with the redd during a high flow event, or getting dried up because the water level went so low. Additionally, you want to provide them with the best habitat for their development. Elie Chantriaux and Zoé Gauthey investigated these questions, by monitoring female habitat choice, female investment in terms of egg size, and egg survival, conditional on water level during three years on two different rivers. 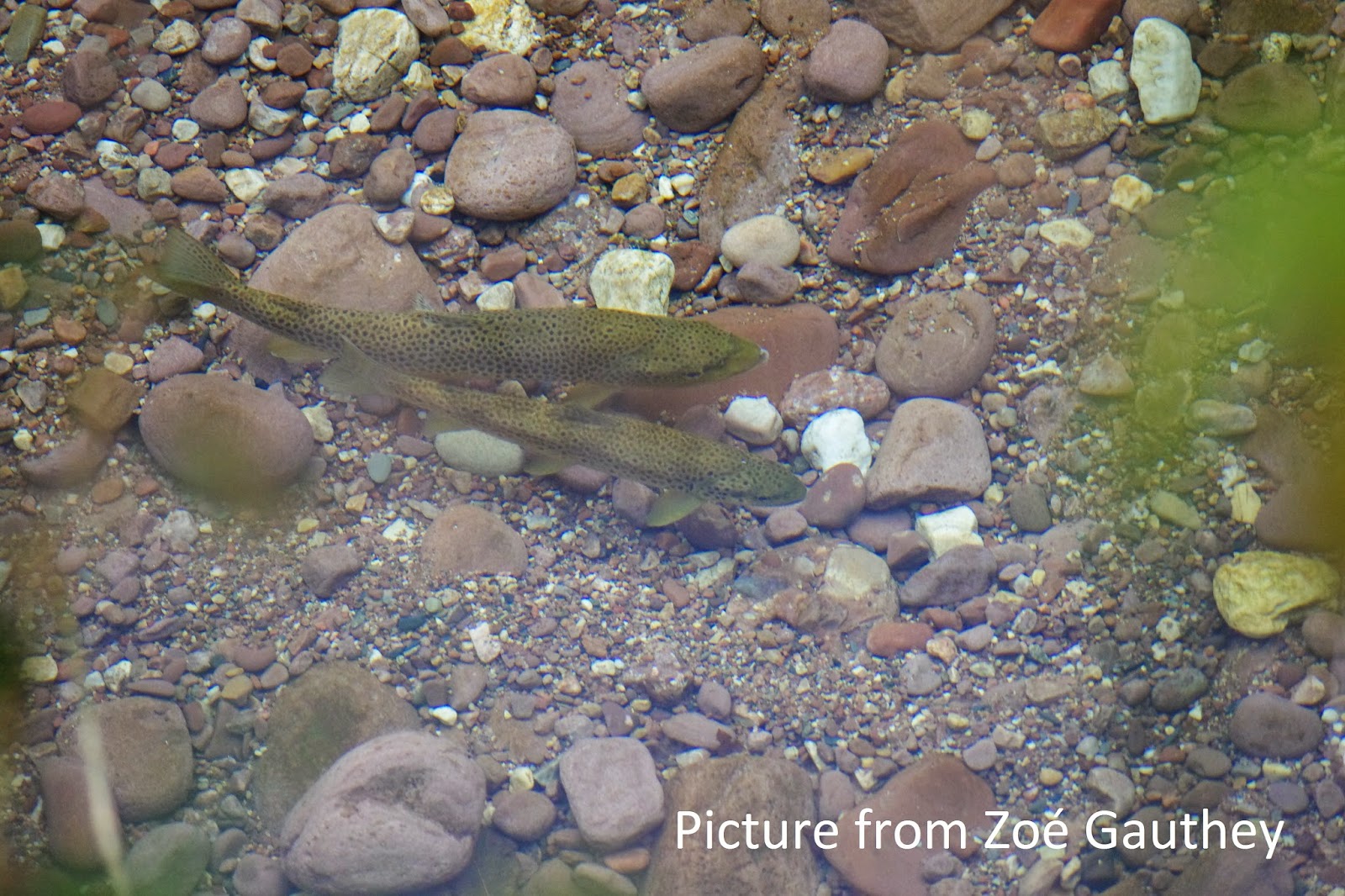 Female brown trout have access to a large range of habitat conditions to bury their eggs. But do they make an optimal choice regarding extreme flow conditions?
Their results show that between 60 and 70% of eggs get scoured before hatching, mainly due to high flow events, sometimes due to redd scouring by competing females themselves. But interestingly, the redd depth or its composition in terms of substratum particle size had no effect on the probability to get impacted by scouring. It appears that brown trout early life is mainly dominated by random events, and that females do not have any way - or possibility - to predict these events. So no, female trout cannot see into the future, and could be increasingly impacted by frequent extreme flow events. They still have a last resort: they can fraction their clutch in several batches, and dig several redds. Costly, but probably increasingly efficient if climate experts are right with their predictions.

So yes, EU cares about fish life, behaviour, populations. In fact, without EU funding, much of our research would not be possible, and this research is often connected to local and regional interest. More actions, educational programs or information can be found directly on the AARC project website: