Human history is paved with dreams of promised lands, often handed by a godly figure, and offered to mankind for colonization. Generally speaking, these promised lands are void of previous human presence. When they are not, it generates long lasting problems which are not the focus of today’s post, quite the opposite in fact.
Invasion biology typically deals with the promised land concept: discover, settle and multiply in a new environment. For fish, the notion of promised land may vary, but it generally already includes other fish species presence, may they be competitors, predators, or food. This is often factorised under the “invasibility” term. And this is interacting with “invasiveness” that characterizes a species intrinsic ability to invade a system. The respective boundaries of these two concepts are somewhat difficult to describe, and they usually strongly interact, so it would be cool to be able to somehow isolate one of these two to study the other properly.

Such a setup would require a fish species to be invading an ecosystem without any other prior fish species, which would remove a large part of the invasibility effect. The almost perfect incarnation of this setup is provided by the introduction of various salmonid species in the remote Kerguelen Islands, at the convergence of Indian and Antarctic oceans. The freshwater ecosystems of these islands are initially virgin of fish species, and present a very poor and limited specific diversity. This is almost perfect, because several species were released by “the godly hand” since 1954. However, the success of the invasion by brown trout (Salmo trutta L.) far eclipsed the other introduced species: between 1962 (the first successful natural spawning) and 2012, 42 systems were invaded, and only 9 of these invasions were the consequence of a direct man-made introduction. 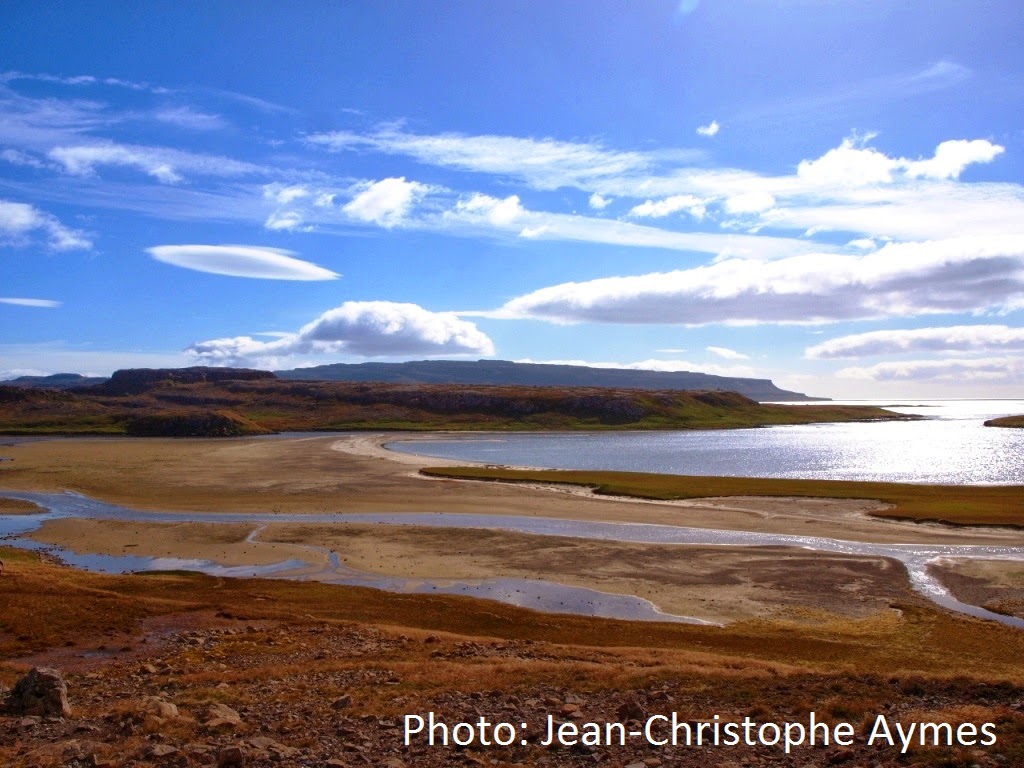 Our lucky lab has been monitoring this colonization process since the beginning. We therefore have a relatively precise idea of the colonization dynamics. This offered a unique opportunity to study metapopulation dynamics of the invasion process, as it is shown by the figure 1 below. 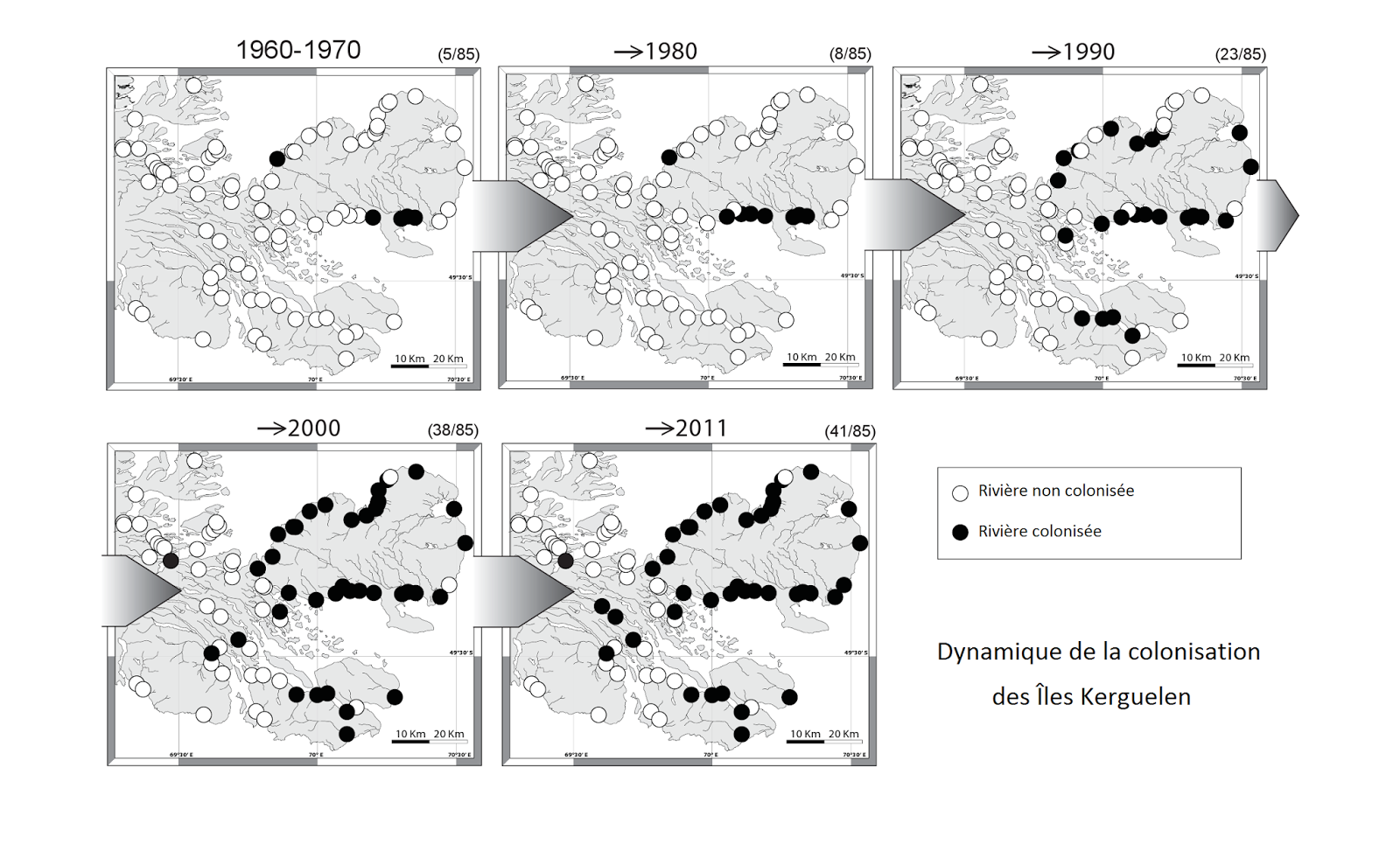 Figure 1: Brown trout colonization progress since 1960 as monitored by our lab. The black dots represent either observed colonizations, or deduced colonizations using scale readings.White dots are for virgin patches.

We built a metapopulation-like invasion model, accounting for various possible distance matrices between patches, patch size, but also accounting for possible temporal trends in the dispersal kernel as well as in the colonization function, allowing to test for possible change in the invasion process along time. Because we had uncertainties on some colonization dates for some patches, we also integrated this uncertainty in the model. Below, a plot of trajectories obtained from the model, compared to the observed data. 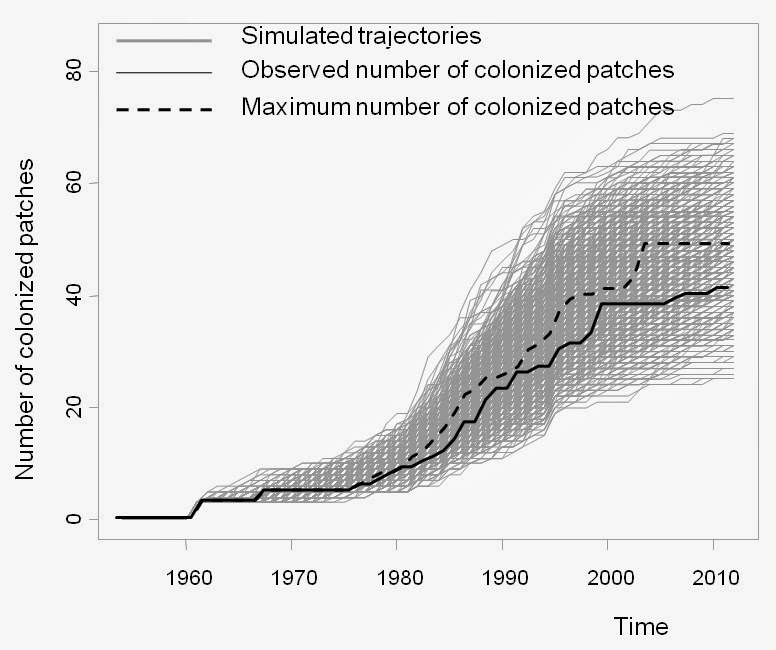 Figure 2: A projection of simulated trajectories obtained from the model (full grey lines), compared to observed number of colonized rivers along time (full black line). The interrupted line also indicate what could be the maximum number of colonized patches, accounting for the fact that we could not check each system each year. This uncertainty was included in the model estimates, and generates a part of the variation observed between trajectories.

The main results were satisfying – at least for a modeler. The model actually predicted that colonization could occur (cool!) and that lack of colonization was not probable (equally cool!). It also predicted a slowing pace of the number of river colonized per year, hereby meaning that a peak in the invasion dynamics had been reached in the 1980’s. Now, that is for the general pattern, but the underlying details are of much more interest:
Additionally, several cool things can be imagined based on these results. First, assuming that the estimated parameters apply, we can try to predict what would have happened if man only made one successful release of brown trout in 1962. The figure 3 below shows that quantitatively speaking, half the number of actually colonized rivers in 2012 would still be virgin. 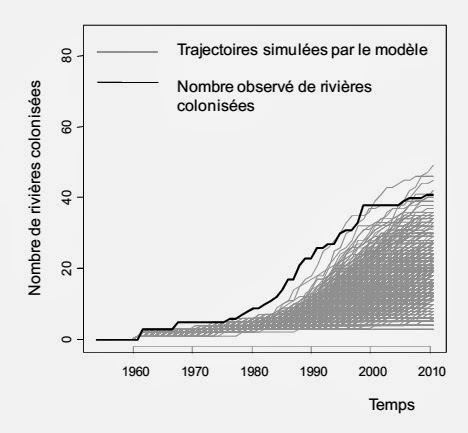 Figure 3: The same plot of projected trajectories, but now in French, and assuming that only one man-made introduction happened in 1962, in one of the central river system (Rivière du Chateau). So not only man intervention was a prerequisite for salmonid invasion of these remote islands, but the introduction effort highly influenced the general dynamics of invasion.

Second, if the process goes on, it means that colonization rate will decrease, but colonizations might happen now farther from the invasion core. Which is a problem, since brown trout is considered as an invader in these ecosystems. However, the available virgin patches are now mostly located on the western part of the archipelago, and some of them are under the influence of several glaciers - currently melting.
Coming back to the Promised Land, despite the lack of fish prey, fish competitor or fish predator in rivers, brown trout thrived in these ecosystems, perhaps demonstrating a high invasiveness potential. Yet, the colonization process is slowing down. And man-made introductions are nowadays totally forbidden too. It is somehow puzzling to see how successful this species can be out of its initial distribution area, in a wide range of invasibility conditions (South America, New Zealand, Kerguelen). 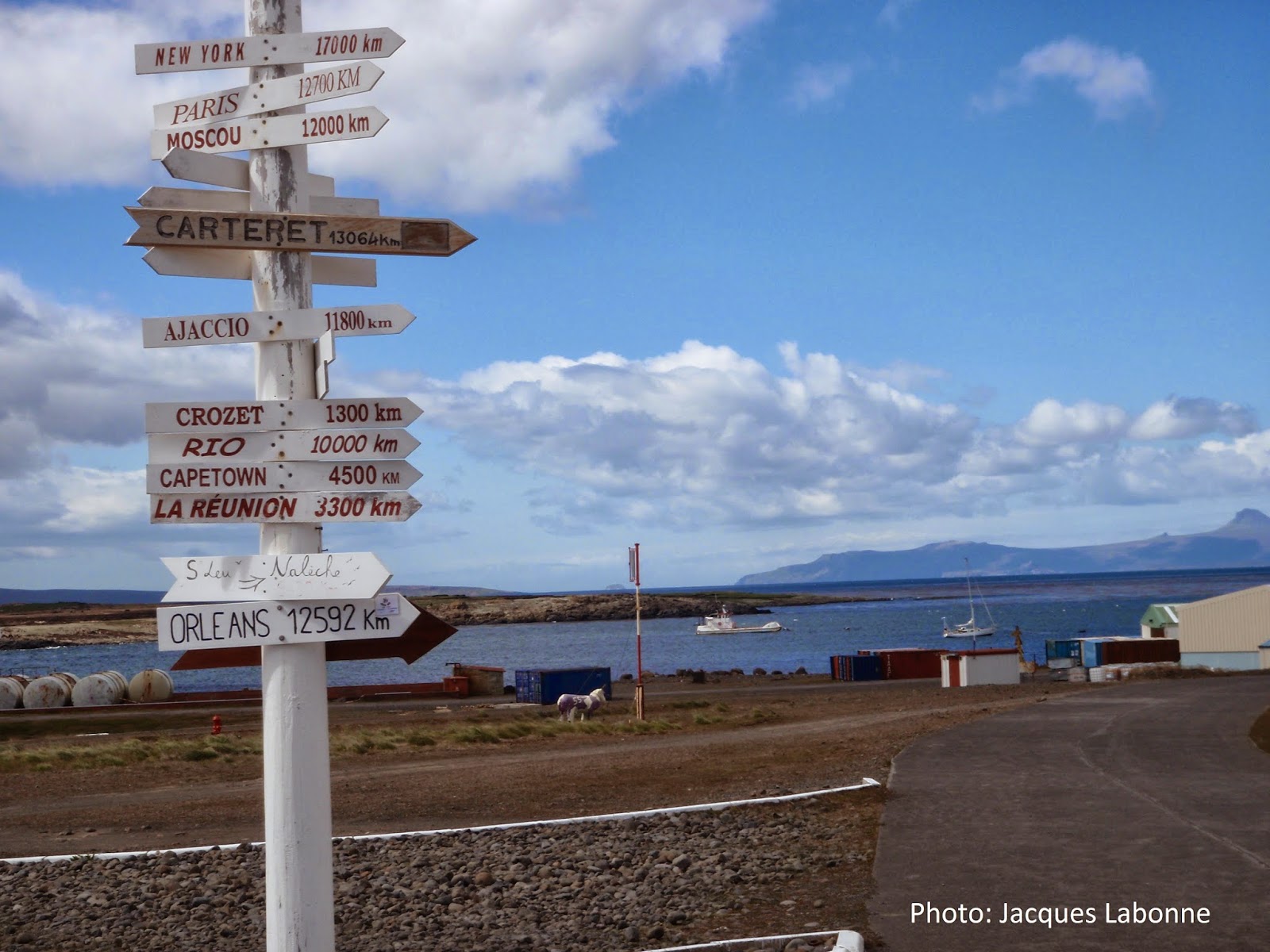 Everywhere you go, brown trout might be already there.

We certainly hope that this study will contribute to understand and to forecast how this species will now behave in the numerous ice-melting boreal landscapes.

If you read French, and want to know more about our work in Kerguelen Islands, you can also have a peek at our recent report on the last expeditions supported by the French Polar Institute.