Who mates with who ?

Since Darwin's second seminal work, "The decent of man, and selection in relation to sex", the fact that traits differ between males and females - for two genders species - has been the focus of many scientists. It was often coined, and often demonstrated, that males tended to develop traits that would increase their access to females, be it arms, colors, sensory advantages, etc., and that males would try to select the females presenting the highest quality: fecundity, maternal care for instance. It was equally often said that females should seek beneficial traits in males, that could either directly increase the survival of their offspring, or indirectly improve their fitness through genes transmission.  And finally, it is also expected that potential sexual partners should have a compatible genomes, so to improve fitness of offspring, and also to reduce homozygosity.

In a nutshell, it is of course an awful shortcut to encompass hunnerds of studies and works, many of them not supporting these ideas. It is also an equally awful way to assign parental roles, whereas things are much more variable in truth. Now, what is the general outcome of all these possible choices ? Is the pairing process random ? Or is there a correlation (positive or negative) between male and female phenotypes or genotypes across mated pairs ? This second option is referred to as assortative mating.


Above, an example of negative assortative mating among  alien muppets.


One general thought emerges still: positive assortative mating should be more frequent in the wild than random mating, or non-assortative mating. Meaning, you tend to mate with sexual partners that resemble you. And when scientists perform meta-analyses - a peculiar exercise that helps them reach top journals while eventually pointing at the same common biases that undermine their results - well, they tend to fine that in animals at least, assortative mating is the most common rule.
To some extent, many studies about assortative mating attempt to relate their finding to possible locally adaptive strategy: choosing assorted mates would increase the likeliness to transmit locally adapted genes to your decent. Here again, this is a very simplified résumé. Some studies actually find such a relationship, some others fail to do so. What is less frequent, and in fact to our knowledge, was never done before (drum roll), is to investigate how individuals choose a mate in different environmental contexts. Would they be consistent in their choice, whatever the environment ? Or would they change it? And if so, do they change it to increase the fitness of their decent ?

Well, we happened to be in a situation were we could actually try to test for that context dependency in assortative mating. What we did was, in principle, very simple. We placed two populations, 1 and 2, in two environments, A and B. Then we observed who mated with who, in each environment.
In each environment, we could expect three outcomes: 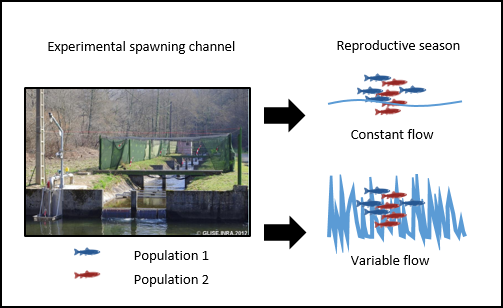 Now to the specifics:


- we sampled in two populations of wild brown trouts, about 10 males and 15 females from each population placed in each environment. Total = 100 !
- these two populations are geographically and genetically isolated.
- environment A was characterized by a constant discharge during the whole spawning season (2 months), whereas discharge was variable and random for environment B.
- clutches were left in our experimental channel until hatching and emergence from gravel, then we sampled them to genetically assign each offspring to a pair of potential parents: this allowed to track who mated with who.

Should these two mate ?

So what did happen ?


Well, in environment A (constant discharge), we could find no footprint of assortative mating, neither positive nor negative. So, random mating ! It was as if fish did not actually care about potential sexual partners origin to make their choice. Quite an unexpected result, at least for us actually.
But in environment B, we found positive assortative mating: fish tended to strongly avoid sexual partners from the other population. Well, when we go dissecting further the results, we see that males from population 2 had a lower mating success than males from population 1 in environment B, and this was the primary source of non random mating.  More details in our paper here.

We do not pretend to understand all the mechanisms producing this general result. We do not even pretend that this would be frequently reproducible, although the results is the sum of a large number of interactions between these 2X50 wild individuals over 2 months. But the result holds: assortative mating maybe, random mating, maybe, but that could all be context-dependent. The take-home message is thus: there might not be a rule of thumb about how animals mate, and how environment controls this process.

Think about it, if you plan to move you and your spouse to a new city.

From the bare minimum

Can too much relatedness affect the fate of pioneers?

In a previous post, we spoke about how brown trout managed a rather successful colonization of the remote sub-Antarctic Kerguelen Islands. We also believe that multiple introductions in different river systems and from different origins in Europe increased the probability of success in this process (Lecomte et al. 2013). The general idea behind this belief is that more diversity allows for faster adaptation over generations (or simply allows to select the most adapted genotype at introduction). This well accepted idea in evolutionary biology and in invasion biology can also be looked the other way around: a total lack of genetic variation should actively prevent selection, and thereby possibly prevent adaptation, persistence, and further successful colonization. Think of two genitors, one male, one female, arriving together in a virgin river, and mating there for the first time: the river is initially (and possibly eventually) populated in the most inbred way: brothers and sisters. That means, hell of a low genetic diversity. But it could actually be a frequent case during a colonization process.

It is not easy to actually monitor such things naturally, one has to be very lucky to be there, at the right place, at the right time. Although such a luck may sometimes occur, we have another way to look at such a scenario: in the colonization process of Kerguelen, some remote sites were introduced by man as late as 1993, and for two of them, Val Travers and Clarée, we have the initial number of parents that were used to generate the progenies for introduction (one female and one male for Val Travers, one female and two males for Clarée). These two systems have another characteristic: they are still far away from other colonized rivers, and so we can be fairly certain that no immigration occurred yet.